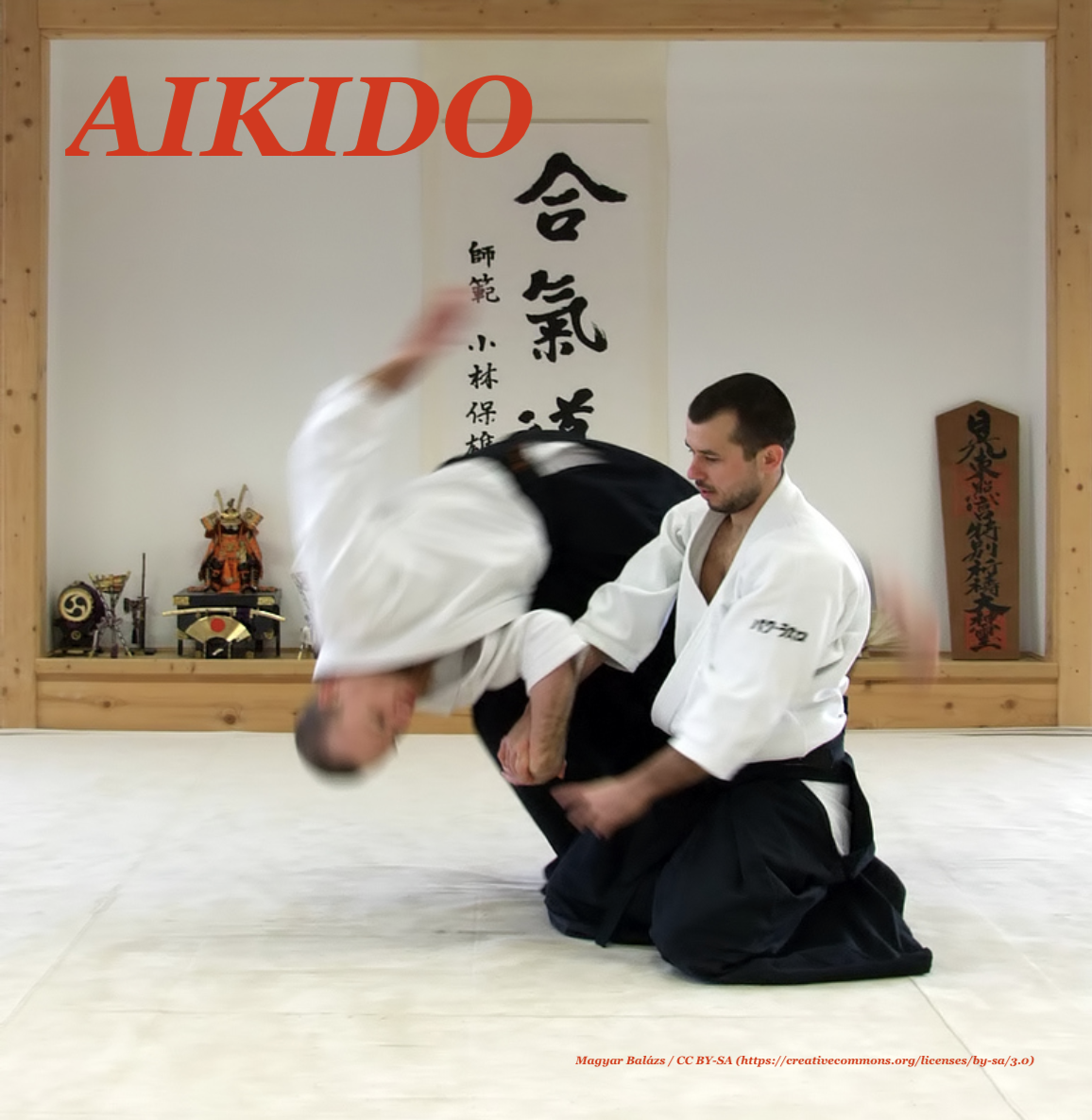 Our Aikido program is purely movement based, and is a no-contact, no-sparring program.

Aikido is a modern Japanese martial art developed by Morihei Ueshiba as a synthesis of his martial studies, philosophy and religious beliefs. Ueshiba’s goal was to create an art that practitioners could use to defend themselves while also protecting their attackers from injury. Aikido is often translated as “the way of unifying (with) life energy” or as “the way of harmonious spirit”. According to the founder’s philosophy, the primary goal in the practice of aikido is to overcome oneself instead of cultivating violence or aggressiveness. Morihei Ueshiba used the phrase “masakatsu agatsu katsuhayabi” (“true victory, final victory over oneself, here and now”) to refer to this principle.

Aikido techniques are usually a defense against an attack; therefore, to practice aikido with their partner, students must learn to deliver various types of attacks. Although attacks are not studied as thoroughly as in striking-based disciplines such as karate or boxing, “honest” or “sincere” attacks (a strong strike or an immobilizing grab) are needed to study correct and effective application of technique.

Many of the strikes (打ち, uchi) of aikido are often said to resemble cuts from a sword or other grasped object, which indicates its origins in techniques intended for armed combat. Other techniques, which appear to explicitly be punches (tsuki), are also practiced as thrusts with a knife or sword. Kicks are generally reserved for upper-level variations; reasons cited include that falls from kicks are especially dangerous, and that kicks (high kicks in particular) were uncommon during the types of combat prevalent in feudal Japan. Some basic strikes include:

Beginners in particular often practice techniques from grabs, both because they are safer and because it is easier to feel the energy and lines of force of a hold than a strike. Some grabs are historically derived from being held while trying to draw a weapon; a technique could then be used to free oneself and immobilize or strike the attacker who is grabbing the defender.

When all attacks are considered, aikido has over 10,000 nameable techniques. Many aikido techniques derive from Daitō-ryū Aiki-jūjutsu, but some others were invented by Morihei Ueshiba. The precise terminology for some may vary between organisations and styles; what follows are the terms used by the Aikikai Foundation. (Note that despite the names of the first five techniques listed, they are not universally taught in numeric order.)[3] Several techniques (e.g. the “drop” throws) are also shared with judo, which can be considered a “cousin” of aikido due to their shared jujutsu background.

Different types of kokyūnage include:

Diagram showing two versions of the ikkyō technique: one moving forward (the omote version) and one moving backward (the ura version). See text for more details.

Aikido makes use of body movement (tai sabaki) to blend with uke. For example, an “entering” (irimi) technique consists of movements inward towards uke, while a “turning” (転換, tenkan) technique uses a pivoting motion. Additionally, an “inside” (内, uchi) technique takes place in front of uke, whereas an “outside” (外, soto) technique takes place to his side; a “front” (表, omote) technique is applied with motion to the front of uke, and a “rear” (裏, ura) version is applied with motion towards the rear of uke, usually by incorporating a turning or pivoting motion. Finally, most techniques can be performed while in a seated posture (seiza). Techniques where both uke and tori are sitting are called suwari-waza, and techniques performed with uke standing and tori sitting are called hanmi handachi.

Thus, from fewer than twenty basic techniques, there are thousands of possible implementations. For instance, ikkyō can be applied to an opponent moving forward with a strike (perhaps with an ura type of movement to redirect the incoming force), or to an opponent who has already struck and is now moving back to reestablish distance (perhaps an omote-waza version). Specific aikido kata are typically referred to with the formula “attack-technique(-modifier)”. For instance, katate-dori ikkyō refers to any ikkyō technique executed when uke is holding one wrist. This could be further specified as katate-dori ikkyō omote, referring to any forward-moving ikkyō technique from that grab.

Atemi (当て身) are strikes (or feints) employed during an aikido technique. Some view atemi as attacks against “vital points” meant to cause damage in and of themselves. For instance, Gōzō Shioda described using atemi in a brawl to quickly down a gang’s leader. Others consider atemi, especially to the face, to be methods of distraction meant to enable other techniques. A strike, whether or not it is blocked, can startle the target and break his or her concentration. The target may also become unbalanced in attempting to avoid the blow, for example by jerking the head back, which may allow for an easier throw. Many sayings about atemi are attributed to Morihei Ueshiba, who considered them an essential element of technique.