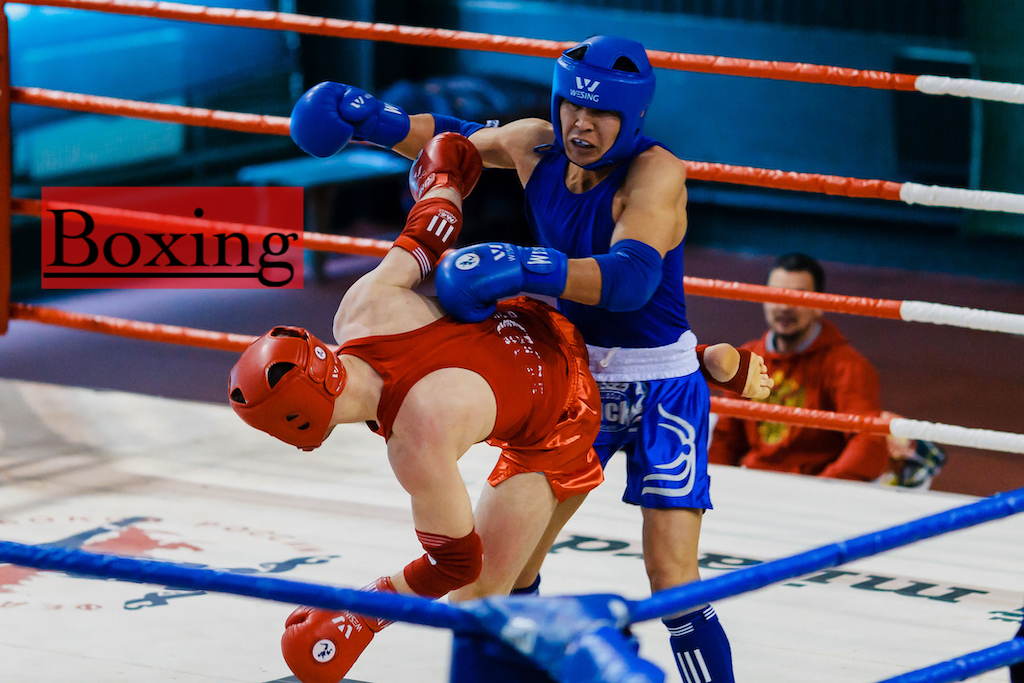 Boxing is a combat sport in which two people, usually wearing protective gloves, throw punches at each other for a predetermined amount of time in a boxing ring.

Amateur boxing is both an Olympic and Commonwealth Games sport and is a common fixture in most international games—it also has its own World Championships. Boxing is overseen by a referee over a series of one- to three-minute intervals called rounds.

The result is decided when an opponent is deemed incapable to continue by a referee, is disqualified for breaking a rule, or resigns by throwing in a towel. If a fight completes all of its allocated rounds, the victor is determined by judges’ scorecards at the end of the contest. In the event that both fighters gain equal scores from the judges, professional bouts are considered a draw. In Olympic boxing, because a winner must be declared, judges award the content to one fighter on technical criteria

There are four generally accepted boxing styles that are used to define fighters. These are the swarmer, out-boxer, slugger, and boxer-puncher. Many boxers do not always fit into these categories, and it’s not uncommon for a fighter to change their style over a period of time.

The swarmer (in-fighter, crowder) is a fighter who attempts to overwhelm his opponent by applying constant pressure — taking away an opponent’s usually superior reach. Swarmers tend to have very good head movement in order to get inside. Good power, a good chin, and a tremendous punch output (resulting in a great need for stamina and conditioning). This style favors closing inside an opponent, overwhelming them with intensity and flurries of hooks and uppercuts. They tend to be fast on their feet which can make them difficult to evade for a slower fighter; or are great at cutting off the ring with precise footwork. They also tend to have a good “chin” because this style usually involves being hit with many jabs before they can maneuver inside where they are more effective.[1] Many swarmers are often either shorter fighters or fighters with shorter reaches, especially in the heavier classes, that have to get in close to be effective.

The out-boxer (out-fighter, boxer) is the opposite of the swarmer. The out-boxer seeks to maintain a gap from their opponent and fight with faster, longer range punches. Out-boxers are known for being extremely quick on their feet, which often makes up for a lack of power. Since they rely on the weaker jabs and straights (as opposed to hooks and uppercuts), they tend to win by points decisions rather than by knockout, although some out-boxers can be aggressive and effective punchers.[1]

If the out-boxer represents everything elegant about boxing, the slugger (brawler, puncher) embodies everything brutal about the sport. Many sluggers tend to lack finesse in the ring, but make up for it in raw power, often able to knock almost any opponent out with a single punch.[1]

Most sluggers lack mobility in the ring and may have difficulty pursuing fighters who are fast on their feet but that’s not always the case. Compared to swarmers and out-boxers, sluggers normally throw fewer but harder shots and rely less on combinations. Sluggers often throw predictable punching patterns (single punches with obvious leads) which can leave them open for counterpunching.[1]

The boxer-puncher possesses many of the qualities of the out-boxer: hand speed, often an outstanding jab, combination and/or counter-punching skills, better defence and accuracy than a slugger, while possessing slugger type power. The Boxer-puncher may also be more willing to fight in an aggressive swarmer-style than an out-boxer. In general the boxer-puncher lacks the mobility and defensive expertise of the pure boxer. Boxer-punchers usually do well against out-boxers, especially if they can match their speed and mobility. They also tend to match up well against swarmers, because the extra power often discourages the swarmer’s aggression. Boxer-punchers can be hard to categorize since they can be closer in style to a slugger, swarmer, or an out-boxer.

Sub-styles and other categories[edit]

A counterpuncher utilizes techniques that require the opposing boxer to make a mistake, and then capitalizing on that mistake. A skilled counterpuncher can utilize such techniques as winning rounds with the jab or psychological tactics to entice an opponent to fall into an aggressive style that will exhaust him and leave him open for counterpunches. For these reasons this form of boxing balances defense and offense but can lead to severe damage if the boxer who utilizes this technique has bad reflexes or isn’t quick enough.

A switch-hitter switches back and forth between a right-handed (orthodox) stance and a left-handed (southpaw) stance on purpose to confuse their opponents in a fight. Right-handed boxers would train in the left-handed (southpaw) stance, while southpaws would train in a right-handed (orthodox) stance, gaining the ability to switch back and forth after much training. A truly ambidextrous boxer can naturally fight in the switch-hitter style without as much training. 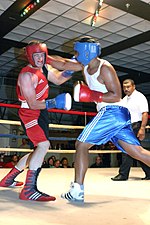 Headgear is no longer mandatory in amateur and Olympic boxing.

Boxing techniques utilize very forceful strikes with the hand. There are many bones in the hand, and striking surfaces without proper technique can cause serious hand injuries. Today, most trainers do not allow boxers to train and spar without hand/wrist wraps and gloves. Handwraps are used to secure the bones in the hand, and the gloves are used to protect the hands from blunt injury, allowing boxers to throw punches with more force than if they did not utilize them.

Headgear protects against cuts, scrapes, and swelling, but does not protect very well against concussions. Headgear does not sufficiently protect the brain from the jarring that occurs when the head is struck with great force. Also, most boxers aim for the chin on opponents, and the chin is usually not padded. Thus, a powerpunch can do a lot of damage to a boxer, and even a jab that connects to the chin can cause damage, regardless of whether or not headgear is being utilized.

In a fully upright stance, the boxer stands with the legs shoulder-width apart and the rear foot a half-step in front of the lead man. Right-handed or orthodox boxers lead with the left foot and fist (for most penetration power). Both feet are parallel, and the right heel is off the ground. The lead (left) fist is held vertically about six inches in front of the face at eye level. The rear (right) fist is held beside the chin and the elbow tucked against the ribcage to protect the body. The chin is tucked into the chest to avoid punches to the jaw which commonly cause knock-outs and is often kept slightly off-center. Wrists are slightly bent to avoid damage when punching and the elbows are kept tucked in to protect the ribcage. Some boxers fight from a crouch, leaning forward and keeping their feet closer together. The stance described is considered the “textbook” stance and fighters are encouraged to change it around once it’s been mastered as a base. Case in point, many fast fighters have their hands down and have almost exaggerated footwork, while brawlers or bully fighters tend to slowly stalk their opponents. In order to retain their stance boxers take ‘the first step in any direction with the foot already leading in that direction.’[4]

Different stances allow for bodyweight to be differently positioned and emphasised; this may in turn alter how powerfully and explosively a type of punch can be delivered. For instance, a crouched stance allows for the bodyweight to be positioned further forward over the lead left leg. If a lead left hook is thrown from this position, it will produce a powerful springing action in the lead leg and produce a more explosive punch. This springing action could not be generated effectively, for this punch, if an upright stance was used or if the bodyweight was positioned predominately over the back leg.[5] The preparatory positioning of the bodyweight over the bent lead leg is also known as an isometric preload.

Left-handed or southpaw fighters use a mirror image of the orthodox stance, which can create problems for orthodox fighters unaccustomed to receiving jabs, hooks, or crosses from the opposite side. The southpaw stance, conversely, is vulnerable to a straight right hand.

North American fighters tend to favor a more balanced stance, facing the opponent almost squarely, while many European fighters stand with their torso turned more to the side. The positioning of the hands may also vary, as some fighters prefer to have both hands raised in front of the face, risking exposure to body shots. 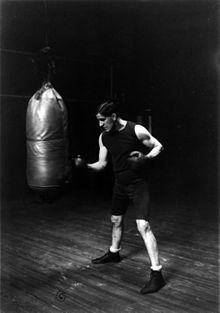 The four basic punches in modern boxing are the jab, the cross, the hook, and the uppercut. 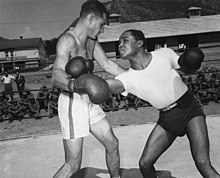 Henry Armstrong blocking and parrying at a 1943 U.S. Army exhibition.

There are 3 main defensive positions (guards or styles) used in boxing: