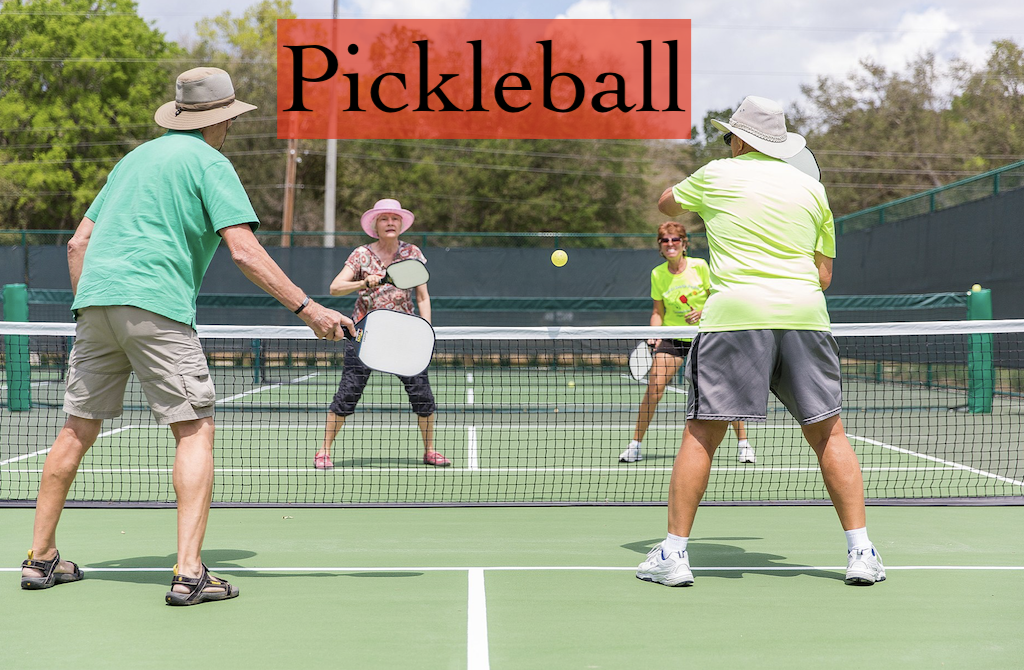 Pickleball is a paddleball sport (similar to a racquet sport) that combines elements of tennis, badminton, and table tennis.[2] Two or four players use solid paddles made of wood or composite materials to hit a perforated polymer ball, with 26-40 round holes, over a net. The sport shares features of other racquet sports: the dimensions and layout of a badminton court, and a net and rules somewhat similar to tennis, with several modifications. Pickleball was invented in the mid 1960s as a children’s backyard game

The game started during the summer of 1965 on Bainbridge Island, Washington, at the home of Joel Pritchard, who later served in Congress and as lieutenant governor.[4] He and two of his friends, Bill Bell and Barney McCallum, returned from golf and found their families bored one Saturday afternoon. They attempted to set up badminton, but no one could find the shuttlecock. They improvised with a Wiffle ball, lowered the badminton net, and fabricated paddles of plywood from a nearby shed.[5][6][7]

McCallum made the first paddles that were specifically for paddleball on his basement bandsaw. He tried several alternative paddles, but one he called “M2” become the paddle of choice for most players.[8] In 1972, McCallum incorporated Pickle-Ball, Inc. and manufactured wooden paddles to help grow the sport. His son David McCallum now runs the business, which is headquartered in Kent, Washington.[9]

Some sources claim that the name “Pickleball” was derived from that of the Pritchard’s family dog, Pickles, or from the term “pickle boat”.[5][7] According to Joan Pritchard, Joel Pritchard’s wife, “The name of the game became Pickle Ball, after I said it reminded me of the Pickle Boat in crew where oarsmen were chosen from the leftovers of other boats. Somehow the idea the name came from our dog Pickles was attached to the naming of the game, but Pickles wasn’t on the scene for two more years. The dog was named for the game, but stories about the name’s origin were funnier thinking the game was named for the dog.”[10]

The pickleball court[11] is similar to a doubles badminton court. The actual size of the court is 20 by 44 feet for both doubles and singles. The net is hung at 36 inches on the ends, and 34 inches at center. The court is striped like a tennis court, with no alleys; but the outer courts, and not the inner courts, are divided in half by service lines. The inner courts are non-volley zones and extend 7 feet from the net on either side.[12]

The ball is served[13] with an underarm stroke so that contact with the ball is made below waist level (waist is defined as the navel level) in an upward arc. The server hits from behind the baseline on one side of the center line and aims diagonally to the opponent’s service court (as in the figure on the right).

Only the serving side may score a point. Play ends for a point when one side commits a fault.[14] Faults include:

Tournament games may be played to 11, 15 or 21 points with players rotating sides at 6, 8 or 11 total points respectively.

The server or server and partner usually stay at the baseline until the first return has been hit back and bounced once.

At the beginning of a doubles game before any serving, the score is 0–0. Then the side serving first gets only one fault before their side is out, meaning that their opponents serve next. After the first fault each side gets 2 faults (one for each team member serving) before their side is “out”.

Para-Pickleball, or wheel chair pickleball, was officially recognized as a competitive branch of Pickleball by the United States of America Pickleball Association in 2016. Rules for those in wheelchairs are similar to the standing rules with minor alternatives. The player’s wheelchair is considered to be part of the player’s body and all applicable rules that usually apply to the body will also apply to the player’s wheelchair. A pickleball player in a wheelchair is allowed two bounces instead of the one a standup player would receive. When a player in a wheelchair is serving the ball, they must be in a stationary position. They are then allowed one push before striking the ball for service. When the player strikes the ball, the wheels of the wheel chair shall not touch any baselines, sidelines, center lines or the extended center or sidelines. When there is a mixed game of those in wheelchairs and those standing, the applicable rules apply for those players respectively. Standing players will adhere to the standing pickleball rules and the wheelchair players will adhere to the wheelchair pickleball rules.[16]